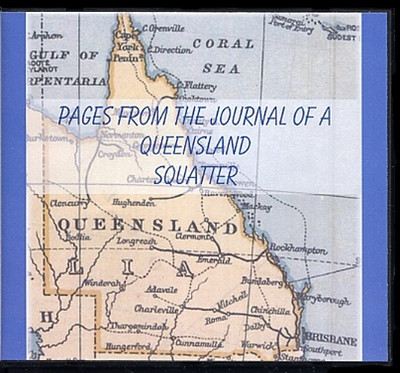 Pages from the Journal of a Queensland Squatter

Published in 1901, this book by Oscar de Satagé records the memories of more than thirty years of pastoral life and adventure in Australia. He came originally to Victoria in 1853  to the goldfields. The following year he travelled to New South Wales and then to Queensland later that same year. It is stories of Queensland that feature largely in his reminiscences.

In 1853, ... The Australian colonies did not carry then one-fifth of their present population. Railways were only commencing to be thought of; agriculture and its kindred industries were confined to the wants of the growing population; fencing for pastoral purposes was unknown; Victorian vineyards were still unplanted, ..

There are chapters on Victoria, Moreton Bay via Sydney, the Darling Downs, Liverpool Plains and Llangollen, the Namoi, the Darling, a trip to the Paroo, the Barcoo, Coreena, Cloncurry, Aramac, the Peel River and Peak Downs as well as others focusing more specifically on his experiences droving, pioneering and sheep station life. Politics are also discussed with other chapters looking at the initiation of responsible government, Queensland parliamentary life, and land laws  at various times he was member for Clermont and the Mitchell.

ALSO AVAILABLE AS AN EBOOK:
Pages from the Journal of a Queensland Squatter