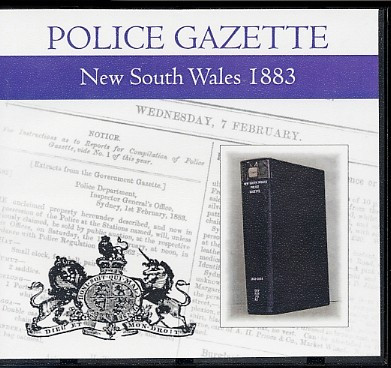 If you had family living in New South Wales in 1883, have you thought of looking at the Police Gazettes for information? These really are a historian's goldmine of information. Compiled to be distributed amongst the Police Force only, these Gazettes contain information that can not be found anywhere else. Far from just listing those who were in the Police Force, or those that were on the 'wrong side' of the law - you will also find entries of missing persons, those that were a victim of crime, or had something stolen from them. Or they have found an item and reported it to the Police.

Of course you also get weekly information on housebreaking, robberies, arson, murders, lost horses and cattle, deserters (both from H.M. Service, and also from families), escaped prisoners and reports on those released ... as well as some information from interstate police gazettes. Totaling nearly 550 pages, this CD contains images of all 52 issues New South Wales Police Gazette for 1883 together with an extensive index,

Deserting Wives, Families &c.
Sydney.-A warrant has been issued by the Water Police Bench for the arrest of Elizabeth Gardiner, charged with unlawfully deserting her illegitimate child, Mary, leaving her without means of support. Gardiner is about 23 years of age, looks much older, low size, slight build, brown hair, dissipated appearance. Complainant, Henry Brown, resides at No. 6, Rowe-street.