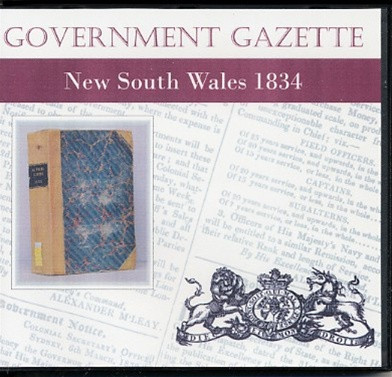 So you've heard of Government Gazettes ... but just what are they, and how can they help you with your research? Government Gazettes, which were generally issued weekly, contain an enormous about of fascinating information, both historical and genealogical.

Until recently they have been largely an untapped resource, partly due to accessibility, as you would only find reasonable collections of the Government Gazettes in major libraries or societies, and partly due to the sheer size of the volumes themselves, and lack of indexes. Now with the publication of the gazettes on CD-ROM, everyone has access this amazing resource.

This early volume of the New South Wales Government Gazette contains important social and genealogical information for those who had ancestors in the region during this period.

Principal Superintendent of Convicts' Office, Sydney, 30th December, 1833
The undermentioned Prisoners having absconded from the Individuals and Employments set against their Names respectively, and some of them being at large with stolen Certificated, and Tickets of Leave, all Constables and others are hereby required and commanded to use their upmost exertion in apprehending and lodging them in safe custody:

Containing scanned images of the whole year's worth of issue, these are made fully-searchable, which then allows you to easily find information on the tens of thousands of ordinary people and localities, small and large, which are mentioned in Government Gazettes.

For those with convict ancestors, if you had a convict in New South Wales during 1834, this really is a must!!