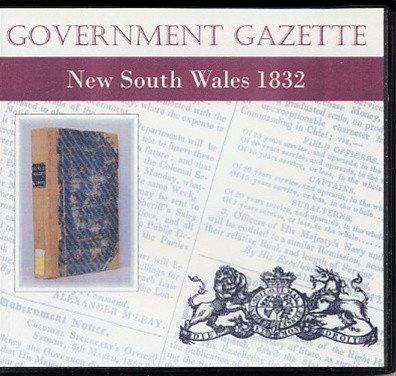 Government Gazettes are a much underused source, partly because of their availability (you would usually only find them in select archives offices or libraries), and partly because people don't know about them. Now that Archive CD Books Australia has started releasing them on CD-ROM, everyone has access to this amazing resource.

The Government Gazettes were weekly newspapers (although there were extra issues produced as well from time to time), and this CD contains all issues that were released for the year 1832 in New South Wales, starting with the very first issue on 7 March 1832.

Full of fascinating information, both historical and genealogical, and averaging about ten pages per issue, you will find information such as land transactions, legal notices, horse and cattle impoundments, partnerships, licences, government contracts and an enormous amount of information relating to convicts, such as Certificates of Freedom, Tickets-of-Leave Granted, Tickets-of-Leave Cancelled, Absconders from Employment, Lists of Runaways Apprehended ... and so much more. So if you've got an interest in New South Wales during this period - you're bound to find something of interest.

High quality scanned images of the whole year's worth of issues, this CD has been bookmarked for easy navigation, and pages can be searched, browsed, enlarged and printed out if required.