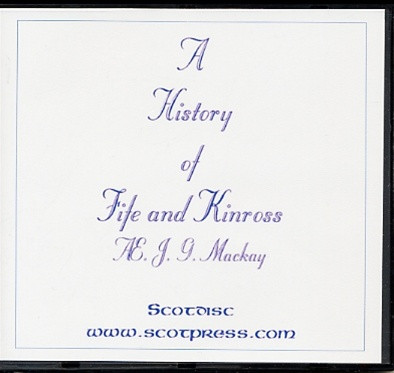 A History of Fife and Kinross

This is one in a series of country histories dating from the Victorian era which took as their objective the recording of the history of a shire from earliest times to the late Victorian period. They sought to cover all aspects of the county, from political and military history from Roman times forward to ecclesiastical history and the role the county and its inhabitants played in the Reformation.

Of equal importance was the history of towns, villages, and parishes within the county, and in this regard this volume includes material on such towns as St Andrews, Pittenweem, Lochleven, Dunfermline, Kirkcaldy, Kinross, and Culross, to cite but a few.

There was as well a chapter on the prominent individuals -- Adam Smith is one example -- who were from the county. Songs, ballads, proverbs, rhymes, and recognised architectural achievements all were provided space. It is therefore a more or less representative county history with much to recommend it to any reader whose ancestors were from the county and who therefore wishes to know more about his or her place of origin.