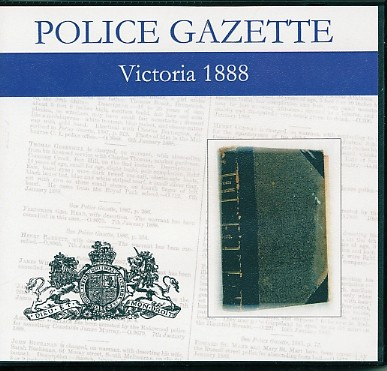 Are you aware that Police Gazettes are a unique, useful, fascinating resource, and they contain a goldmine of information for local, family and social historians? They were compiled to be distributed amongst the
Police Force only, and as such, contain details and information that can not be found anywhere else.

While they do include listings of those in the Police Force who have been appointed, discharged, resigned or died, they contain so much more. Such as court lists, lists of warrants issued, appointments and changes in the Police Service, lists of arrests and discharges (which include descriptions), escaped prisoners, as well as missing persons together with descriptions. Also you will find information on item/s stolen and from who. Notices from Police Gazettes from other states are also often included.

Usually issued weekly, here collected together on the one CD is the whole of the 1888 years worth of issues.

Some example entries are taken from the 25 January 1888 issue:
Housebreaking and Stealing from Dwelling-HousesStolen from the dwelling of James Hart, Grant street, Ballarat East, on the 17th instant, a silver medal wih "Yorkshire Agricultural Society, 1852, to James Hart, for Ingenuity for a brick-making machine" engraved on it; a bronze medal, gilded, and embossed "Albert, President of the Royal Commission." - O.627, 24th January 1888.

Missing FriendsGeorge Craig is missing from his hut, near Walhalla, since the 7th instant. Description:- About 60 years of age, a miner, right middle finger stiff; no better description. His hut is on the Thompson River, into which he may have fallen. - O.455. 20th January 1888.

High quality scanned images of the whole of the original book. This CD has been bookmarked for easy navigation, and pages can be searched, browsed, enlarged and printed out if required