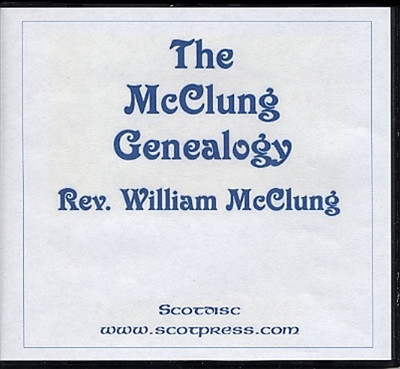 The subtitle here provides valuable information on the purpose and scope of this publication. It is "A Genealogical and Biographical Record of the McClung Family from the Time of their Emigration to the Year 1904." More to the point, it proclaims itself as a history of a Scots-Irish family, Protestant and indeed Presbyterian in religion, who moved from Galloway around 1690 to settle in Ulster in northern Ireland.

There were three McClung brothers -- James, John and Robert -- who settled first in Larne, County Antrim and later near Coleraine and in Belfast. A Thomas McClung, from Moate in County West Meath, settled then near Christiana, Pennsylvania around 1729. A John McClung landed at Boston around 1731 and settled first in Brookfield Massachusetts and then later in Lancaster County, Pennsylvania. Finally there were the eight children of James McClung who came from Ulster to settle in the American colonies, with Lancaster County, Pennsylvania and Augusta County, Virginia the preferred destinations for the family. This is an extended genealogical and historical survey with a considerable amount of material on the 18th century and on frontier life.