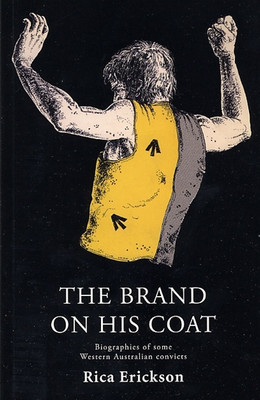 The Brand on his Coat: Biographies of Some Western Australian Convicts

'The Brand on his Coat' relates the histories of a few of the nine and a half thousand convicts who were transported to Western Australia during 1850 to 1868. Some remained incorrigible, others achieved respect as worthy citizens, but the stigma of the convict brand was to remain with them for the rest of their lives. Their descendants were naturally reticent on the subject of their origins. However, in recent years with changes in social attitudes the topic has ceased to be a source of embarrassment, and the way is open to study this important period in Western Australian history.

The introduction of so many convicts into the sparsely populated colony brought social problems as well as material gain. The essays in this work suggest that a rich field awaits those historians who extend their researches into the second and third generation of expiree families. The oft repeated claim that the convict population died out without leaving their mark except in buildings and roads is palpably incorrect, as many thousands of expiree descendants would attest.

The history of Western Australia from the time of the convict era to the gold rushes of the 1890s may well be rewritten as a result of an awakening recognition of this neglected strata of society, and the changes the convicts brought about.

This remains the seminal work on the study of convict lives in Western Australia.