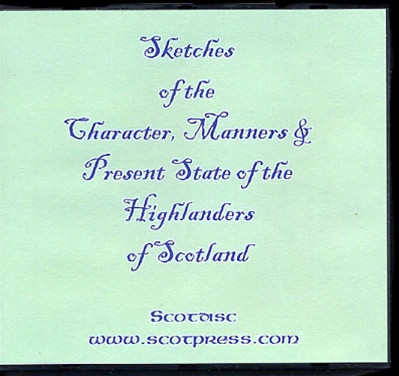 Sketches of the Character, Manners and Present State of the Highlanders of Scotland

Written by Major-General David Stewart, this 3rd edition was originally published 1825 as a two volume set. The full titles of this set is "Sketches of the Character, Manners, and Present State of the Highlanders of Scotland, with Details of the Military Service of the Highland Regiments".

This is an exhaustive history of the Highlands of Scotland and of the customs which characterized them as late as the early 19th century. Included are chapters on clanship, arms, garb, music, and other definitive customs, particularly down to the period 1745-46 and the battle of Culloden. This is followed by an account of the devastated state of the region after Culloden and of the deplorable conditions that prevailed in an economically distressed area suffering from overpopulation. Stewart thus sets the scene for the formation of the Highland regiments, and he details the subsequent military records of the Black Watch, its presence in North America, and its place in the Napoleonic Wars down to Waterloo. This work is particularly valuable for the appendices on the garb, uniforms, weaponry, and music which were said to be characteristic of these regiments so soon after their formation.

This CD consists of scans of the original books, which can be browsed, enlarged and printed if required. Please note: it is not searchable.