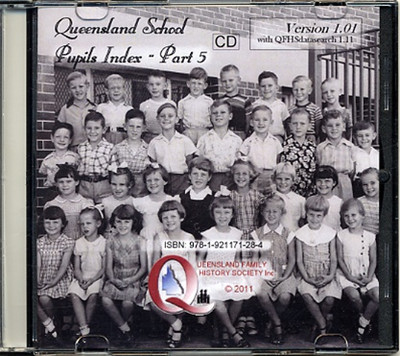 Almost everyone has gone to school, and many have been enrolled at more than one school, but finding the enrolment records can be a very time consuming task. Thanks to the Queensland Family History Society, they have made the daunting task of looking for school records (in Queensland) incredibly simple.

This CD index to Queensland School Pupils is the fifth from the QFHS continuing QSPI project, indexing admissions and other school records in Queensland, and can be directly searched on name, school and year with QFHSdatasearch. The information has not been previously published.

QSPI Part 5 indexes over 450,000 names drawn from 170 Queensland schools. It and the earlier QSPI CDs together cover almost 1,750,000 names from over 1,000 schools. Dates for this CD range from 1866 to 2003, with a 30 year closure, as recommended by Education Queensland, when names were extracted directly from Admission Registers. Schools range from large city ones with admissions in the thousands to country one-teacher schools with a total enrolment of hundreds. Some schools have long ceased to exist; others are still functioning.

Sources from which the names are drawn are diverse - actual school admission registers, school histories covering a significant anniversary (Jubilee, Golden, Centenary) in the life of a school, and local histories which dont focus on the school but include a pupil list as part of their story. Many sources provide additional information on the family including age at admission, birth date, parents name and occupation, religion, address.