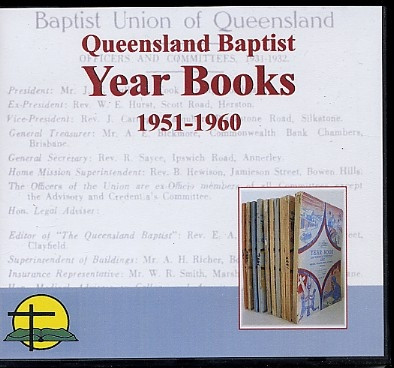 These year books were produced by the Baptist Association of Queensland from 1907. This CD contains those published between 1951 and 1960.

Each issue includes directory information on the Baptist churches throughout Queensland which were part of the Association. A copy of the Baptist constitution, lists of committees and officers, presidents addresses, annual reports, general reports and accounts, Queensland Baptist College information, statistics and church notices are also included.

Fully searchable, with advanced fast searching, this CD will be useful to church historians, local historians and anyone with ancestors who were active in the Queensland Baptist churches.

This product contains high quality scanned images of the original year books. It has been bookmarked for easy navigation. Pages can be searched, browsed, enlarged and printed out if required.