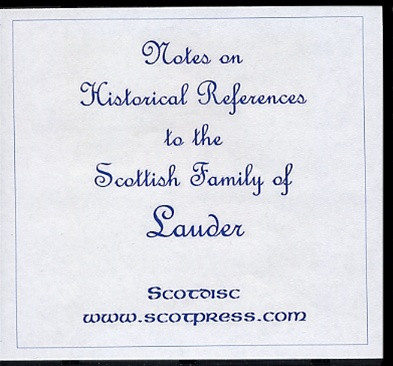 Notes on Historical References to the Scottish Family of Lauder

Originally published in 1884 is a 168 page book where the primary emphasis here is upon the Lauder family in Scotland and upon the history of that family as it evolved over the centuries and as it interacted with national events.

The author begins with a consideration of the origin of the name which may have been taken from the town and lands of Lauder, perhaps from the Celtic word laudur, meaning a river which overflows its borders, or perhaps from a Norman French origin. Next, he discusses the heraldry supplied to the family over the centuries, and then to the history of the Lauders from the 11th century onward. The family emerged to national importance during the 15th century and the majority of this book presents primary and secondary material relating to Lauder over the centuries, including extracts from Burkes Peerage, Stodarts Scottish Arms, Douglass Peerage, Keiths Scottish Bishops, various burgh and church histories, and other sources of primary material. The end result is a source book of Lauder material for the family genealogist and historian.

This CD consists of scans of the whole of the original articles relating to this family, which can be browsed, enlarged and printed if required. Please note: it is not searchable.