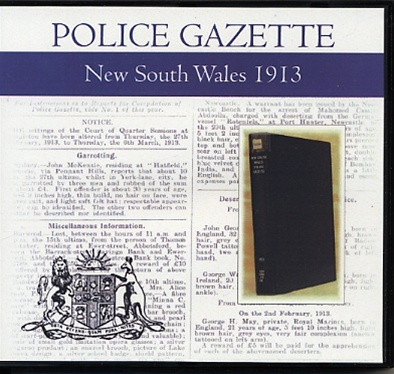 What information can be found in a New South Wales Police Gazette?
The information contained in the Police Gazettes does vary a little from year to year, but overall you will find details of any changes within the police force which are all listed (promotions, demotions, discharges, resignations, deaths), information is also given on housebreak-ins, robberies, arson, murders, rewards, warrants issued, lists of those arrested and discharged, lost horses and cattle, deserters from services and from families, escaped prisoners, missing friends, lost and found items, inquests, prohibited immigrants, and publicans licences. Notices from interstate police gazettes are usually included if it was felt that the person may be heading towards that state.

How can this help me?
Anyone researching their family will have a 'lost' family member or two! You may well find them listed here, being on either side of the law. Or maybe they were a Policeman who transferred to another department or division, or someone that was a victim of a crime. You can find the physical details on people listed here, missing, wanted or released, which helps to paint a picture of them (name, aliases used, age, height, colour hair, colour eyes, distinguishing features, even colour clothing worn).

Far from being just a unique and extremely fascinating resource for local, family and social historians - they are useful for anyone with an interest in New South Wales in 1913. The CD contains all issues that were released during that year.

Murder
Muswellbrook.-Alfred Brown (45) and
Gladys May Cribb (18 1/2), charged with the murder of an infant named Cyril Cribb at Muswellbrook, on or about the 17th April, 1913, have been arrested, Cribb by Sub- Inspector Somervaille, West Maitland Police, on information supplied by Constable Holby, Muswellbrook Police, and Brown by Detective Surridge and Constables Holby and Webb, Newcastle and Muswellbrook Police. Committed for trial by the Muswellbrook Coroner at the Newcastle Circuit Court.

Attempted Murder
Yass.-Etbel Armstrong (28), charged on warrant with feloniously attempting to administer poison to Elizabeth Armstrong (her mother-in-law) with intent to murder, has been arrested by Constable C. Leonard, Hydney Polite. Remanded to Yass, and committed for trial at Yass Sessions. Bail allowed.

Robbery Under Arms
Vide Western Australia Police Gazette, 1913. page 103
FIVE HUNDRED POUNDS REWARD.
Bullfinch.-Whereas, during the night of the 2nd May instant, a quantity of retorted gold, of the value of about £3,000, was stolen from the premises of the Bullfinch Proprietary (W.A,), Limited, at Bullfinch. Notice is hereby given that His Excellency the Governor will be advised to extend a free pardon to any accomplice, not being the person, or one of the persons, who actually committed the above offence, who shall first give such information as shall lead to the apprehension and conviction of the actual offender, or of one of the actual offenders. And a notice is further given that the Local Secretary of the Bullfinch Proprietary (W.A.), limited, has, on instructions from the managing director Mr. D. L. Doolette, offered a reward of Five hundred pounds (£500) for recovery of the stolen gold. Information to the Officer-in-Charge Criminal Investigation Branch, Perth, or any Police Station.
R. CONNELL,
Commissioner of Police.

Far from being just a unique and extremely fascinating resource for local, family and social historians - they are useful for anyone with an interest in New South Wales in 1913. The CD contains all issues that were released during that year.