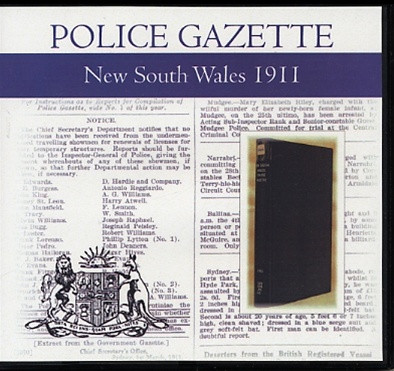 Looking for a person in New South Wales 1911? Have you thought of looking in the Police Gazettes?

Containing a whole host of information, the Police gazettes were released weekly, and include an enormous amount of genealogical and historical information for the researcher. Their primary role was to provide information and instructions to members of the police force.

You can expect the New South Wales Police Gazettes to include the following information that will usually list names and some times personal details, descriptions with photograph, addresses and/or occupations may be an added bonus for the researcher:
- apprehensions
- complainants
- deaths in public places
- escapees and absconders from custody
- lost or stolen property and stocknames of victims; sketches of jewellery and watches
- deserting wives, families, etc
- deserting from military service
- deserting from merchant vessels
- inquests
- missing friends
- persons suspected or wanted for a crime and warrants issued
- police promotion examination results and appointments
- prisoners discharged from gaols
- prisoners released on tickets of leave (under licence)
- prohibited immigrants
- publicans licences

Bigamy
Sydney-Charles Edward Moss (40), charged on warrant that he did, at Sydney, on the 3rd March, 1897, marry Amelia Elizabeth Stevens, and that whilst so married did, on the 5th April, 1911, at Sydney,  marry Florence Elizabeth Parker, the said Amelia Elizabeth Stevens being then alive, has been arrested by Senior-constable Robertson and Constable Saunders, Sydney Police. Committed for trial at Quarter Sessions.