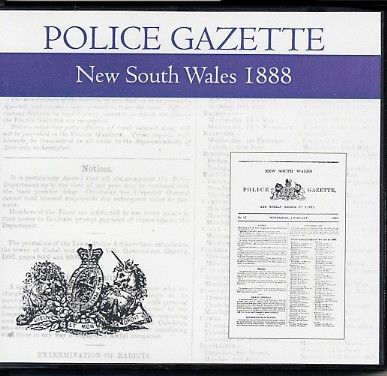 What information can be found in a New South Wales Police Gazette?
The information contained in the Police Gazettes does vary a little from year to year, but overall you will find details of any changes within the police force which are all listed (promotions, demotions, resignations, dismissals, retirements, deaths etc), information is also given on housebreak-ins, robberies, arson, murders, lost horses and cattle, deserters, escaped prisoners, missing friends, and reports on those released. Notices from interstate police gazettes are sometimes included.

Far from being just a unique and extremely fascinating resource for local, family and social historians - they are useful for anyone with an interest in New South Wales in the 1880s.

Apprehensions, &c.
George Splatt, charged with assaulting Florence Carmichael and robbing her of a purse containing 19s., has been arrested by Senior-constable Grice, Sydney Police. Committed for trial at Quarter Sessions.

James M'Fadden, charged on warrant with wilfully and maliciously setting fire to a grass paddock at Wilga, the property of Albert Rothery, Esq., has been arrested by Constable Stirton, Nyngan Police. Committed for trial at Bourke Quarter Sessions.

George Collins, summoned for embezzling the sum of 5s, the property of his employer, Jenkin Williams, has been committed for trial at Maitland Sessions.

Frederick Hall, alias Dryer, alias Masher Fred, charged with breaking and entering the Albert Park Railway Station, Melbourne, and stealing the sum of £64 4s 3 d., the property of the Victoria Railway Department, has been arrested in Sydney by Detectives O'Donnell and Rochaix. Remanded to Victoria.

This CD contains all 52 weekly issues that were produced for the year 1888, and is truly a fascinating read for learning about the social history of the time, even if you don't have family there.