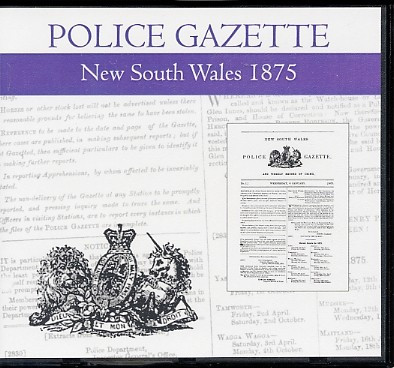 If you had family living in New South Wales in 1875, have you thought of looking in Police Gazettes for information? These are a truly unique, useful and extremely fascinating resource for local, family and social historians.

Compiled to be distributed amongst the Police Force only, these Gazettes contain details and information that can not be found anywhere else. Apart from any changes within the police force which are all listed (promotions, demotions, dismissals, deaths etc), information is also given on housebreak-ins, robberies, arson, murders, lost horses and cattle, deserters, escaped prisoners, missing friends, reports on those released, even deaths reported to the police (together with their place of death and cause of death given). Notices from interstate police gazettes are sometimes included.

A fascinating read for learning about the social history of the time, even if you don't have family there - this CD contains all 52 issues that were produced for the year.