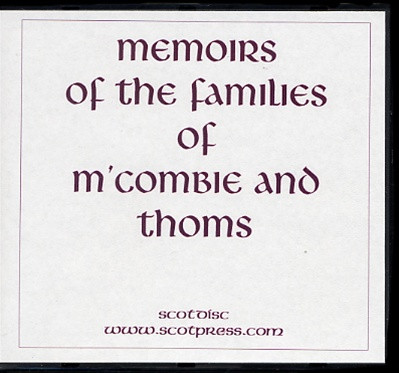 Memoirs of the Families of M'Combie and Thoms

Memoirs of the Families of M'Combie and Thoms: Originally M'Intosh and M'Thomas. This history of the McCombie family provides substantial information about a family which long was associated with Clan Macintosh. Sometimes called Clan M'Thomas, the McCombies settled in Glenshee by the end of the 16th century where they intermarried with the Farquharsons and where they entered into a bond of manrent with Lachlan Mor, 16th chief of the McIntoshes.

The story of McCombie Mor and his encounters with the Earl of Athole and with local injustice is at the core of this family history, which continues with his activities as a royalist during the civil wars of the 17th century, his feud with the Farquharsons, the Raid of Crandart of 1669, the fight at Moss of Forfar in 1673, and the fate of McCombie Mor and his family. Additional chapters detail the McCombies of Aberdeenshire who emerged during the 18th and 19th centuries as substantial local landowners and tenants.

The first edition excluded those of the family south of the Grampians, and this omission the 2nd enlarged edition rectifies.The Forfarshire McCombies are given equal place, and the new edition thereby provides substantial information on both the Angus and Donald lines as well as additional material on the family of McCombie Mor and his ancestors in Glenshee.