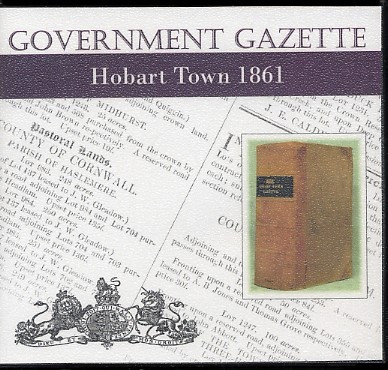 Government Gazettes are a much underused source, partly because of their availability (you usually only find them a few archives offices or libraries), and partly because people don't know about them. Now that Archive CD Books Australia has started releasing them on CD-ROM, everyone has access to this amazing resource.

The Government Gazettes were weekly newspapers (although there were extra issues produced as well from time to time), and this CD contains all issues that were released for the year 1861. Full of fascinating information, both historical and genealogical, you will find information such as land transactions, legal notices, notice of acts, insolvency and bankrupt notices, patent applications, absconders and missing people, partnership, licences, contracts, government institutions and positions, statistics and more, even private advertisements (many of which include lost or stolen property with rewards) and more. So if you've got an interest in Tasmania during this period - you're bound to find something of interest.

Example entries:
taken from the 8 January 1861 issue
Carrick Road District
4th January, 1861.
We, the undersigned landholders of the Road District of Carrick, hereby convene a Public Meeting of the landholders of this District, to be holden at the 'Carrick Inn', Carrick, on Monday, the 21st day of January, at the hour of 2 o'clock in the afternoon, for the purpose of electing Trustees, and otherwise carrying out the provisions of "The Cross and Bye Roads Act", 24 Victoria, No. 7.
Thomas Reiby.        John Frost.
John K. Archer.      Richard Hume
Robert Beck.          Richard Symmons.
John Symmons.       Thomas Symmons.
James Pascoe.         Thomas Fogarty.

taken from the 1 October 1861 issue
Reward of £200!
Department of the Inspector of Police
25th March, 1861
Whereas, by the verdict of the Jury at the Coroner's Inquest held at Sorrell, in Tasmania, on the 4th, 16th and 18th instant, it appears that certain corn and hay stacks belonging to Mr. Richard Smith, of Cornhill, in the Police District of Sorrell aforesaid, were unlawfully and wilfully set on fire by some person or persons unknown: this is therefore to give notices, that I am authorised by Alfred Garrett, Esquire, Manager of the Derwent and Tamar Assurance Company, on behalf of the several insurance Companies of Hobart Town, to offer a Reward of One Hundred Pounds, in addition to a like sum which will be paid by the authority of the Governor, to any persons or persons who will give such information as shall lead to the detection and conviction of the perpetrator or perpetrators of the said felony.
J. Forster, Inspector of Police

SAMPLE FILE
Click here to download a file of sample pages from this book
Right click on the link and select "save as" - to a location on your hard drive. The sampler can be opened, navigated and searched as with the full CD file/s.
Sample files usually contain the title page, contents, some introductory pages and sample pages from the body of the book. Often the complete index from the original book is included.