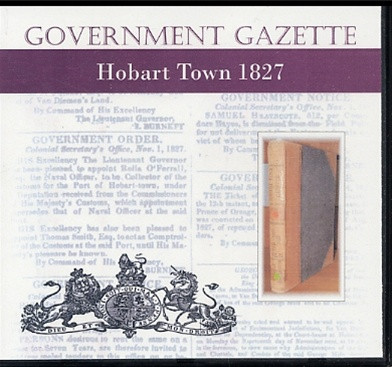 Government Gazettes in general contain a vast amount of historical and genealogical information. However they are largely an untapped resource. The few complete runs that are available are usually only found in major libraries. And even for researchers who do have access to these the sheer size and extent of the Gazettes is daunting.

Normally issued weekly, the Hobart Town Gazette served two functions: that of being a publication of official government notices, as well as
having general newspaper content.

You will find here thousands of ordinary people and localities, small and large. The information is too varied to describe in full, but some
examples are:

Colonial Secretary's Office, Nov. 14, 1827
His Excellency The Lieutenant Governor has been 'pleased to grant the following Indulgence:
Ticket of Leave to Daniel Hall, 349 Malabar.
The Ticket of Leave to Benjamin Smith, 519. Competitor notified in The Hobart-town Gazette of the 3rd instant, is annulled, he having been recently sentenced to the chain gang, at New Norfolk, for improper conduct.

This CD contains high quality scanned images of the whole years worth of issues, and has been bookmarked for easy navigation. Pages can be searched, browsed, enlarged and printed out if required.

Note: the issues from two available copies of the 1827 gazette both commenced on 24 February 1827.

High quality scanned images of the whole (available) years worth of issues. This CD has been bookmarked for easy navigation, and pages can be searched, browsed, enlarged and printed out if required.