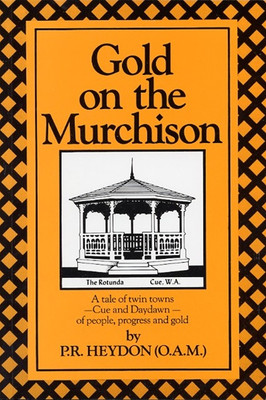 Gold on the Murchison: A Tale of Twin Towns (Cue and Daydawn) of People, Progress and Gold

This is a story of twin towns - Cue and Day Dawn - and the part the towns and their people played in the development of Murchison gold. These towns are 3.5 miles apart, and the Big Bell gold mine which is twenty miles west of Cue. Starting in the 1880s, the story has been taken up to the first closure of big Big Bell.

From the first rushes in the 1880s and the hardships of the pioneers to Cue's status as the 'Queen of the Murchison', the decay to ghost towns, oblivion and eventual rebirth.

The tale of Murchison Gold should remind everyone of the part played by those who travelled 'along to road to Cue' in bringing much needed prosperity to the colony of Western Australia - a feat unfortunately never given its full credit, being overshadowed by the events which followed Bayley's discovery of gold at Coolgardie six months after Fitzgerald's initial find at Cue.

The author has diligently researched the people and happenings in this remarkable period of Western Australia's history. Much of the information comes from the various local newspapers of the time - which includes the humour and the tragedy; the tremendous hardships suffered.