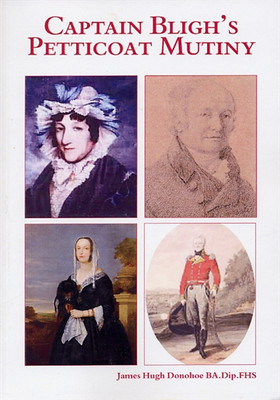 When people hear the words Captain Bligh, and mutiny, they automatically think of Mutiny on the Bounty, which is where in 1789, 18 mutineers set Lieutenant Bligh and many of his loyal crew afloat in a small boat, then burned the HMS Bounty. What the mutineers didn't count on was Bligh and his crew surviving and being returned the England to share the tale.

This book is not about the Mutiny on the Bounty but rather another of the four mutinies that Captain Bligh was involved in.

This story of the incident is based on two petitions dated 26th and 27th January 1808, these were addressed to the New South Wales Corps Commander, Major George Johnston. Largely organised by Major George Johnstons partner Esther Abrahams, her daughter Rosanna and Rosannas husband Isaac Nichols, they collected the signatures from several hundred people, mostly their family friends who favoured Major Johnston arresting Captain William Bligh, Governor of the colony of New South Wales.

It shares the story of two powerful and colourful men Captain William Bligh RN and John Macarthur both hellbent on mutual destruction.

Bligh was not the perfect governor, and held back the development of the New South Wales colony as a result. But his successor Major-General Lachlan Macquarie certainly got things happening when he was appointed in 1810, thanks to Bligh's removal!

This book embraces a copy of the actual petitions, together with almost one hundred biographies of the wives and partners of those who signed them. The inclusion of list of land grants made after William Bligh's arrival and prior to the arrival of Lachlan Macquarie shows the immediate impact of the Mutiny. Also listed are the members of the New South Wales Parliament who descended from families of the colony at the time of mutiny, most notably, descendant from the Petitioners.