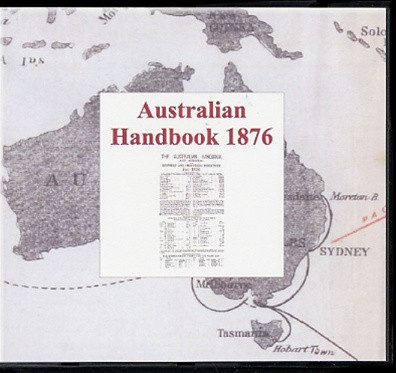 This publication covers the whole Australian region. It is mainly concerned with giving an oversight of each Australian colony and is aimed more at the commercial sector.

It has very useful histories of each colony, including New Zealand and Fiji, as seen from the perspective of 1876. In its role as an almanac it contains extensive details of timetables and statistics such as:
- Police Courts
- Succession of Australian Governors
- Taxes
- Directory and Business Guide of London Shippers and Importers
- Mohammedan Calendar
- Newspapers for Colonies as published in London
- Population of Great Britain
- Railway Information

Almanacs are regular publications containing information for the community and data including astronomical records and various statistics, such as the times of the rising and setting of the sun and moon, eclipses, tide times, church festivals, lists of all types, etc.