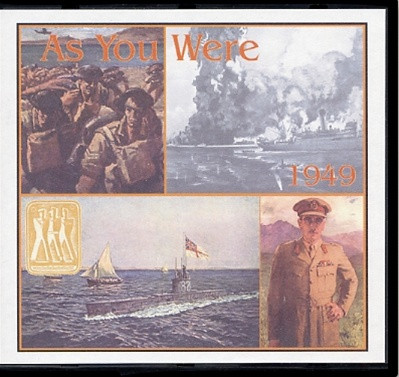 As You Were 1949 continues the service rendered by its predecessors. Its aim is to recall and to record the courage and humour, the boredom and the achievements, the travel and adventure, deeds and misdeeds, and, above all, the good comradeship of the Services during the war years.

Again published by the Australian War Memorial, the fifty-three contributions are from both service and ex-service personnel and cover action in many theatres of war as clearly seen from the following selection  Exit the Rats, Cairo Gharry Ride, Palestine Period Piece, Dive Through the Narrows, Action Over Timor, Sing-Sing at Morami, Rookie Camp, Mediterranean Action, Salute to the A.A.S.C., Sepik Expedition 1945, Tommy Davis A.B., Women of Japan, Head-Hunting, Guadalcanal, Kapitulation!, The Buoys of Port Jackson, Ross Smith - A Tribute, and Retreat Through Greece.

Too many graves with rough wooden crosses counted up the score which Ross Smith and his companions of No. 1 Squadron were later to repay a thousandfold. As the advance went on, Romani, El Arish, Rafa, Belah, Beersheba, the Plain of the Philistines, the Judean Hills, Jerusalem to the Jordan Valley, the cry went up more often, "Rings is right!" as we ungrammatically identified Ross Smith or one of his mates appearing overhead in those Palestinian skies of matchless blue. They never refused a fight, ...

The book contains many illustrations and images, both colour and black and white, of battlefields, equipment, personnel and some of the more light hearted moments. It is a valuable resource and a great read for all interested in military history.

SAMPLE FILE:
Click here to download a file of sample pages from this book.
Right click on the link and select "save as" - to a location on your hard drive. The sampler can be opened, navigated and searched as with the full CD file/s.
Sample files usually contain the title page, contents, some introductory pages and sample pages from the body of the book. Often the complete index from the original book is included.

ALSO AVAILABLE AS AN EBOOK:
As You Were 1949