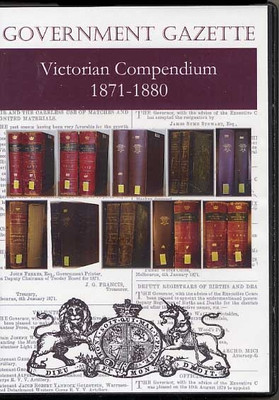 Government Gazettes in general contain a vast amount of historical and genealogical information. However they are largely an untapped resource. The few complete runs that are available are usually only found in major libraries. Even for researchers who do have access to these the sheer size and extent of the Gazettes is daunting.

Now that is all changing - with the publication of the gazettes in an affordable and searchable form on CD-ROM. Tens of thousands of ordinary people and localities, small and large, are mentioned every year in Government Gazettes. But they offer researchers much more than simply names and places. They will help you reconstruct events and circumstances in the life of individuals and communities.

This CD set contains high quality scanned images of the whole of each year from 1871-1880, and has been bookmarked for easy navigation. Pages can be searched, browsed, enlarged and printed out if required.