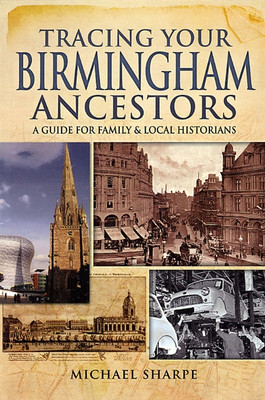 Tracing Your Birmingham Ancestors: A Guide for Family and Local Historians

Birmingham, the cradle of the industrial revolution and the world's first manufacturing town, is an important focus for many family historians who will find that their trail leads through it. Rural migrants, Quakers, Jews, Irish, Italians, and more recently people from the Caribbean, South-Asia and China have all made Birmingham their home.This vibrant history is reflected in the city's rich collections of records, and Michael Sharpe's handbook is the ideal guide to them.

He introduces readers to the wealth of information available, providing an essential guide for anyone researching the history of the city or the life of an individual ancestor. Many of these archival holdings are of national and international significance. Yet research in Birmingham can be a challenge because rapid population growth, frequent boundary changes and the city's position straddling three counties mean that family and local history resources are widely dispersed.

'Tracing Your Birmingham Ancestors' is for beginners and expert researchers alike, offering a compendium of sources from legal and ecclesiastical archives, to the records of local government, employers, institutions, clubs, societies and schools. Accessible, informative and extensively referenced, it is the perfect companion for research in Britain's second city.