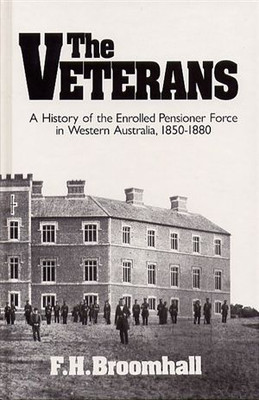 The Veterans: A History of the Enrolled Pensioner Force in Western Australia 1850-1880

This is the first full and accurate account of a military unit virtually unknown. At a crucial period of settlement these soldiers, with their wives and children, totalled some 2500 out of a population of only 23,000.

The force consisted of soldiers (who had mostly seen action in earlier wars) who came as guards on convict ships which between 1850 and 1868 transported almost 10,000 prisoners from the UK. to the Colony. Many of these found a new life.

The first part of the book is an account of the Pensioner force. The second part of 304 pages is an index of over 1000 of the men with extensive biographical information on most - including family details, service record and personal information where available.