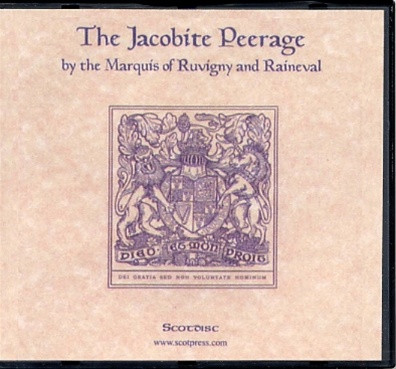 The Jacobite Peerage: Baronetage, Knightage and Grants of Honour

Originally published in 1904, de Ruvigny's important work is the only source for the genealogical information -- as well as the details of the creations themselves -- pertaining to the titles of nobility granted by the exiled Stewart kings after the Revolution of 1688 and extending to 1784. There is a wealth of information here, with descendants in many cases as recent as the early 20th century. While there are English, Scottish, and Irish titles of nobility granted and here studied, the book is of particular interest to the Scottish families of Cameron, Dillon, Drummond, Erskine, Fforester, Fraser, Graeme, Grant, Hay, Lumisden, MacDonald, MacDonell, MacGregor, Mackenzie, Mackintosh, Maclean, MacLeod, Murray, Oliphant, Ramsay, Robertson, Sempill, and Stewart.