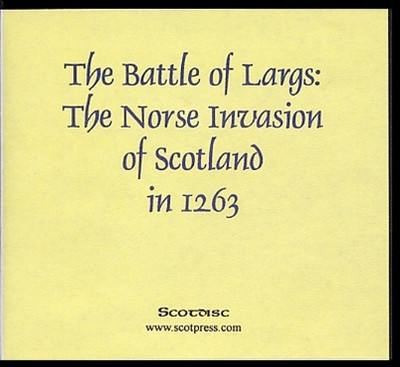 The Battle of Largs: The Norse Invasion of Scotland in 1263

Battles often are cited as turning points in the history of a region, and thus the Battle of Stamford Bridge, the Battle of Hastings and the Battle of Largs become fixed points in the mind of students of Britain. In 1263, the great Scandinavian King Hakon collected an enormous fleet of ships, with troops to match, and sailed for Scotland, only to be defeated by a combination of weather and the Scots army. While all agree that this was not the battle to end Norse authority in Scotland, it was a battle which captured the popular imagination in the 18th and 19th centuries.

This two-part CD includes "The Ancient Accounts of the Battle of Largs," by Robert L. Bremner, which examines 8 different accounts of the battle from 1265 through the 16th century. Included are the Norse Account of 1265, The Chronicle of Melrose, The Chronicle of Man and The Chronicle of Lanercost, the Fordun and Wyntoun Chronciles and excerpts from Boece, Holinshed and Buchanan. The second part contains The Norwegian Account of Haco?s Expedition Against Scotland in 1263. The whole is an amazingly complete account of this often cited battle.