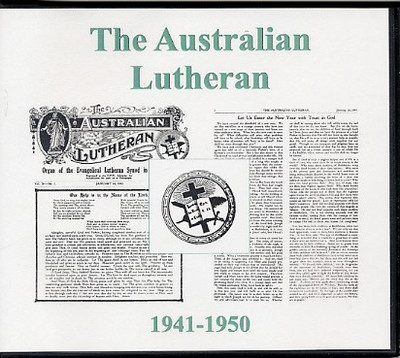 Now available for the first time on CD-ROM. 'The Australian Lutheran' was the nationwide magazine for the Evangelical Lutheran Church of Australia (ELCA) from was published from 1913 to 1966. It gives an amazing insight into the issues of the day and the development and role of the Lutheran Church in Australian history and also provides a large amount of information on specific events and people in the Australian Lutheran churches past in the form of notices, including many marriages, deaths and obituaries.

It contains a huge amount of valuable and interesting information for historians and researchers in many areas, and will prove a valuable resource for many.

Consisting of approximately 4000 pages, this CD set cover the fourth decade in a series of 'Australian Lutheran' magazines ranging from 1913-1966 and covers the 1941-1950 period.

High quality scanned images of each of the original issues. This CD set has been bookmarked for easy navigation, and pages can be searched, browsed, enlarged and printed out if required.