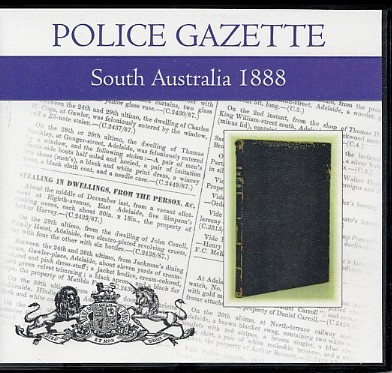 If you had family living in South Australia in the latter 1880s, have you thought of looking at the Police Gazettes for information? These are a unique, useful and extremely fascinating resource for local, family and social historians. Compiled to be distributed amongst the Police Force only, these Gazettes contain details and information that can not be found anywhere else.

This CD-ROM is a compilation of all 52 regular issues of the South Australia Police Gazette, as well as one "Extraordinary" issue, that was issued during 1888. Each issue is usually four pages long, and contains information such as court lists, lists of warrants issued, appointments and changes in the Police Service, lists of arrests and discharges (which include personal descriptions), escaped prisoners, and missing persons. Notices from Police Gazettes from other states are also often included.

Apprehensions During the Week
Ah Woo, by M.C. Clark, for fruitstealing from Herman Muegge, Waterfall Gully; fined £2, one month in default.
David Clarke, by Det. Priest, for larceny from William Hann, Adelaide; whipped.
John and Michael Cass, by M.C. LeLievre, Nairne, for larceny from Charles Hardin, and John Cass for imposition; sent to industrial school.

Stealing in Dwellings, from the Person, &c.
On the 23rd, ultimo, from the yard of the Belair Hotel, Belair, seven holland aprons (two with lace), a nightdress, a chemise, a pair of drawers, and a white silk handkerchief, the property of Kate Dunn.-(C.1167.)