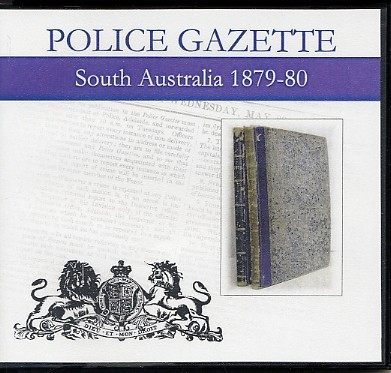 What information can be found in a South Australian Police Gazette?
The information contained in the Police Gazettes does vary a little from year to year, but overall you will find details of any changes within the police force which are all listed (promotions, demotions, discharges, resignations, deaths), information is also given on housebreak-ins, robberies, arson, murders, lost horses and cattle, deserters from services and from families, escaped prisoners, missing friends, lost and found items, and reports on those released. Notices from interstate police gazettes are usually included if it was felt that the person may be heading towards that state.

Far from being just a unique and extremely fascinating resource for local, family and social historians - they are useful for anyone with an interest in South Australia in the 1870s. The CD contains the 1879 and 1880 South Australian Police Gazettes on one CD.

This CD contains high quality scanned images of the whole of each year's issues. It has been bookmarked for easy navigation. and pages can be searched, browsed, enlarged and printed out if required.