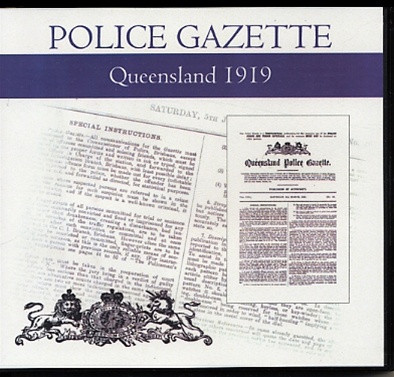 The Police Gazettes are an amazing source of information for historians, detailing events, people and personal details that you just will not find elsewhere.

They were compiled to be a means of communications throughout the states Police Force, and as such you can find all sorts of fascinating information included:
- apprehensions
- complainants
- convictions without custodial sentence
- escapees and absconders from custody
- lost or stolen property and stocknames of victims
- deserting wives, families, etc
- deserting from military service
- deserting from merchant vessels
- missing friends
- persons suspected or wanted for a crime and warrants issued
- police resignations, dismissals and discharges
- police killed in action or dying in the service
- police promotion examination results and appointments
- prisoners tried at supreme and circuit courts
- prisoners discharged from gaols
- prisoners released under licence
- prohibited immigrants
- superannuants

Description of Portraits
No. 991.-Toowoomba-WILLIAM JAMES GRAHAM, missing friend, inquired for at the instance of his wife, Mary Jane Graham, Bridge and Sir streets, Toowoomba. Left Toowoomba by the mail train for Sydney on the 10th March last, where he may have met a woman named Wynne, with whom he was acquainted in England whilst on service abroad, or he may have returned to England. (For description and further particulars see Police Gazette, 1919, page 178).-1940. 12 May, 1919.

No. 994.-Halifax-DAVID A. SCOTT, wanted on warrant, charged with failing to provide prematernity expenses in connection with the birth of his  illegitimate child (Mona Chase, Hailifax, complainant). Description:- About 27 years of age, 6 feet high, dark-brown hair, grey eyes, clean shaven, limps occasionally (result of a would in calf of one leg); is a discharged soldier. Is said to have come to Brisbane, but no trace of him cane be found there.-1991. 15th May, 1919.

Now searchable, these Gazettes on CD-ROM open up a world of interesting and comprehensive information about individual people and their lives in Queensland.