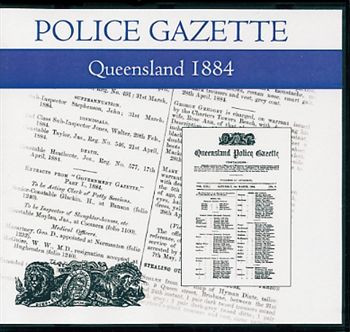 During 1884 the Queensland Police Gazette was issued fortnightly, and stated that it "contains information received in cases of felony and of misdemeanour, and against receivers of stolen property, reputed thieves, and offenders escaped from custody, with the time, place, and circumstances of the offences, and description of offenders or those suspected, giving the appearance, dress, and other marks of identity, with every particular which may lead to their apprehension; and a description, as accurate as possible, of property that has been stolen, horses, &c."

This truly is an historian's goldmine of information which cannot be found elsewhere. Apart from any changes within the police force which are all listed, information is also given on housebreak-ins, robberies, arson, murders, lost horses and cattle, deserters, escaped prisoners, reports on those released, even deaths reported to the police (together with their place of death and cause of death given). Notices from interstate police gazettes are sometimes included.

Unique features of this particular year's worth of issues is that they contain the following:

High quality scanned images of the whole of the years worth of issues. This CD has been bookmarked for easy navigation, and pages can be searched, browsed, enlarged and printed out if required.