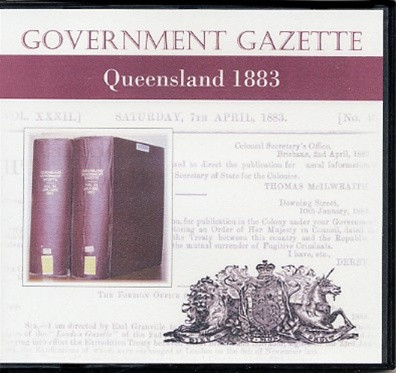 Government gazettes for a particular locality eventually become standardised with the type of material listed. In the 1870s you can expect the Government Gazettes to include the following information that will usually list names and sometimes name of emigrant vessel, addresses and/or occupations:
- appointees to government positions
- appointments of magistrates and Justices of the Peace
- appointments of returning officers
- crown land leases
- deceased estates
- dissolution of business partnerships
- insolvents
- notices or rewards for lost or stolen property and stock
- property owners subject to compulsory land acquisition by government
- purchasers of land lodging caveats under Real Property Act
- unclaimed letters
- unclaimed property (railways)
- witnesses to executions

In the Supreme Court of Queensland.
IN INSOLVENCY.
THE CHIEF JUSTICE.
In the Matter of an Insolvency Petition against James Lewis, of Brisbane, in the Colony of Queensland, carpenter, by himself. UPON the hearing of this Petition this day, it is ordered that the said James Lewis be, and is hereby adjudged insolvent, and that George Henry Newman, Esquire, be Official Trustee of his Estate. And it is further ordered that the First General Meeting of the creditors of the said James Lewis, for the election of a Trustee, be held at the Office of the Registrar of this Court, on the Twenty-third day of January, 1883, at Eleven o'clock of the forenoon. And it is further ordered that the said James Lewis shall, on the Twenty first day of January, 1883, at Brisbane, deliver to the Trustee in this state a full, true, and accurate statement, verified on oath, of his debts and liabilities of every kind, and of the names and residences, so far as known, of his creditors, and of the causes of his inability to meet his engagements. Given under the Seal of the Court, this third day of January, 1883.
By the Court, WILLM. BELL, Principal Registrar.
A. W. CHAMBERS,
Queen street, Brisbane,
Solicitor for Insolvent.

A fascinating read for all with an interest in Victoria and its people at this time. This CD contains high quality scanned images of the whole years worth of issues of the original book. It has been bookmarked for easy navigation. and pages can be searched, browsed, enlarged and printed out if required.