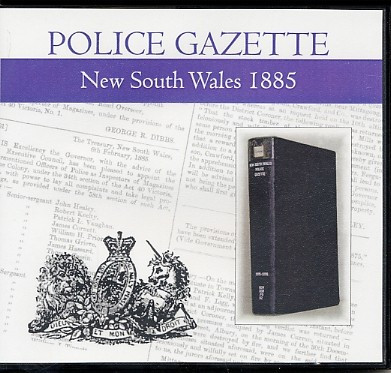 Police Gazettes are a unique, useful and extremely fascinating resource for local, family and social historians as well as researchers in other fields throughout Australia. Compiled to be distributed amongst the police force only, these Gazettes therefore contain details and information that can not be found anywhere else.

A goldmine of information for any historian, the Police Gazettes contain a wide range of information such as lists of warrants issued, details of those arrested and discharged (which include physical descriptions of the offender), escaped prisoners (also with descriptions), details of those deserting their wives and families, missing friends, deserters from H.M. Service, lists of horses and cattle stolen. You will also find details on murders, robberies, arson, rape, sacrilege and more. Notices from Police Gazettes from other states are also often included.

Apprehensions, &c.
Patrick Kirby, undertaker, summoned by Inspector Seymour, Sydney Corporation, for allowing decomposed corpses to remain on his premises in Hunter-street, has been committed for trial at next Quarter Sessions.

Thomas Moore, charged with uttering a £1 note on the E.S. and A.C. Bank, altered to a £5 note to Henry Davis, has been committed for trial at Quarter Sessions. This offender was further charged with uttering similar forged notes to James Richards, Theophilus Dusserre, John Jackson, Richard Stephen, Ernest Rhenisch, and William Amor. (See Police Gazette, 1884, pages 269, 379, 417, and 473). Committed for trial at Quarter Sessions on all the charges.

This CD contains scanned images of the whole year's worth of issues. These have been bookmarked for easy navigation, and the CD is fully searchable.