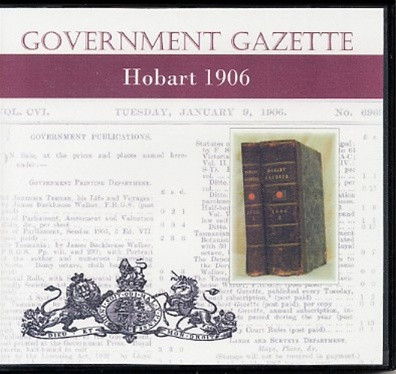 The Hobart Government Gazette, also known as the Hobart Town Government Gazette, and later the Tasmania Government Gazette - is a unique, useful and extremely fascinating resource for local, family and social historians and researchers in other fields throughout Australia. Government Gazettes in general were published by governments and their agencies as a means of communication to officials and to the general public, and therefore contain a vast range of valuable and interesting content.

Bankruptcies, lists of Board members, Dissolution of Partnerships, Foreign Company notices, Government notices, Proclamations, Mining notices, Land acquisitions, rentals, sales and leases are all included, Neglected children department, Probate and Administration notices, Trade Marks, Public works and roads, private notices, and appointments of hundreds of jobs ... these are just a few of the types of records included in this vast resource.

Trade Mark Notice
No. 3316
General Register Office, Hobart,
23rd December, 1905.
Under the provisions of "The Patents, Designs and Trade Marks Act, 1893", application have been made to register the following Trade Mark by Howard Button, Patent Agent, Launceston, in respect of Confectionery (Class 42), in the names of Basil Ansell Spier and Ernest Grove, trading a Spier and Grove, of Australian Buildings, 49 Elizabeth-street, Melbourne, in the State of Victoria, Commonwealth of Australia, Manufacturers' Agents.
The essential particulars of the Mark consist of the representation of a church spire in a grove of trees, and the initials "S.G.".
A facsimile of the Mark may bee seen at this Office.
Robt. M. Johnston, Registrar of Trade Marks. 2598 - 7s. 6d.

Generally issued once a week, this CD contains all issues of the Hobart Government Gazette that were released throughout 1906. The CD contains high quality scanned images, and they have been bookmarked for easy navigation. Pages can be searched, browsed, enlarged and printed out if required.