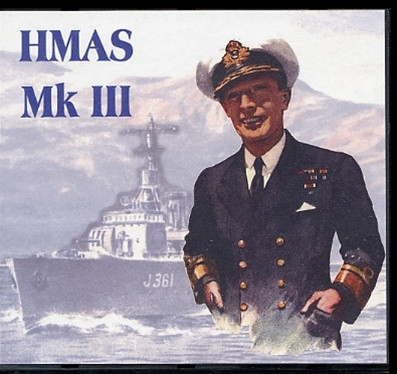 This is the third of a series of four books published by the Australian War Memorial on the Royal Australian Navy during World War II. Written and prepared by serving personnel of the RAN in 1944, it presents "a further unfolding of the story of this war" and the part played by sea power.

It differs from the earlier two versions HMAS and HMAS II in that most of the articles are contributed by personnel afloat and in shore establishments. The years events are told by those who have participated in them. Again a wide variety of areas are covered as indicated by some of the chapter titles  Charting New Guinea, Attack on Hollandia, North of Crete, Berlin Memories, Action Stations off Biak Island, HMAS Vendetta, On a Reef Arafura Sea, Sicilian Drama, and Then the WRANs Came.

Again it includes many photographs and illustrations of ships, charts, personnel and ports largely provided by official war artists and members of ships companies  colour plates include the ships Ipswich, Arunta, Napier, Nizam, and Lonsdale.

Awards to Australian Naval Personnel  this section covers awards made between 30 September 1943 and 30 September 1944, giving the rank or rating of the recipient at the date of the award and a brief description of the service performed.

Distinguished Service Cross: For outstanding skill and determination in H.M.S. Wildgoose when six enemy submarines were destroyed by escort group of which his ship formed part in the course of operations covering the passage of convoys in the North Atlantic: Lieutenant A. V. Atkins, R.A.N.V.R.

SILVER STAR Conferred by the President of the United States of America
For gallantry in action at Rendova, Solomon Islands on the 3oth June, 1943. Landing with the attacking echelon of an infantry battalion to establish a beachhead at Rendova, Lieutenant Rhoades led the assault wave of American troops in a charge on the Japanese defenders. As the result of his vigorous and courageous leadership, hostile forces at Rendova Plantation were struck before they were fully prepared, and were completely routed. Lieutenant Rhoades personally accounted for at least seven of the sixty-five Japanese who were killed in the attack: Lieutenant (Sp. Br.) F. A. Rhoades, R.A.N.V.R.