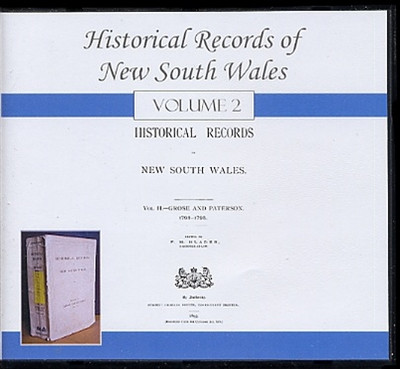 "The Historical Records of New South Wales are published with the object of affording the fullest information obtainable
concerning the foundation, progress, and government of the mother colony of Australia."

Published in 1893, the second volume covers the period 1793 to 1795, devoted mainly to the three years between the departure of Phillip and the arrival of Hunter. As with the first volume in the series, it consists of many letters covering the events of the time, maps, muster rolls, the Macarthur Papers, the journal of Lieutenant King, the journal and letters of Daniel Southwell, British Museum papers and an appendix on the Scotch martyrs.

The first instance of a convict striking a soldier was one boy throwing a stone at another, and which accidentally went near or struck Serjeant Jenkins. On the serjeants complaint, the boy was instantly punished by my order with twenty-four lashes in the barrack-yard, although I was certain he did not mean to throw it at the serjeant. The next, sir, is the same Charles Cooper alluded to in your letter, who was tried b y the magistrates on the 10th June, 1793, for striking Private Chesterton, and punished with one hundred lashes, although he was not sober at the time he committed the action ...
[Lieutenant-Governor King to Lieutenant-Governor Grose, 19 March 1794]