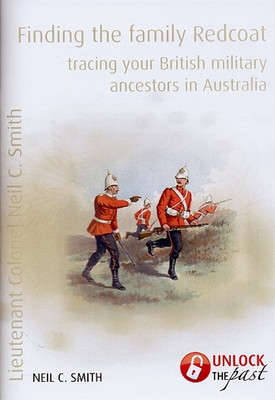 Publisher: Unlock the Past

In recent years there has been a marked increase in the amount of official and invidiual attention given to Australia's rich military past. There are many reasons for this: the electronic media; more easily accessible records, and endless procession of military personalities or milestones under examination and the patriotic commemoration of more and more major conflicts and battles. The thirst for a greater knowledge of Australia's military history and especially those involved is no where more marked that among the nation's genealogists.

Previously there was no concise, yet comprehensive guide to help the family historian embark on the search for Australian ancestors who had served in the British Army in Australia or post discharge. This small book sets out the remedy these failings.

It provides a handy summary of the Redcoats of the British garrison in Australian between 1788 and 1870, and gives details of where to look, what to look for, as well as information on how to understand them, which all helps you get more out of the records. For those seeking to search out their 19th century British Army ancestors who were in Australia, there is no better place to start.