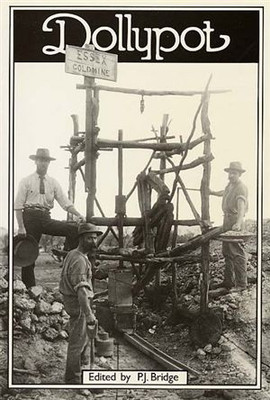 The 'Dolly Pot' column in 'The Western Mail' between 1936 and 1942 was initiated by Cyril Longmore and later taken over by Malcolm Uren. The column started out to collect the reminiscences of the pioneer prospectors and was remarkably successful. Unfortunately, during the war it deteriorated into 'creative writing' and many valuable original contributions were thereby lost.

Nevertheless, the 'Dollypot' is the most significant single source of information on the Westralian goldfields pioneers. it is the voice of the men who made the country. They wrote of sadness and gladness, of humour and hardship, in a way that only experience can.

This selection of tales aims to give a new generation of prospectors an appreciation of the hardships faces by the pioneers of the fortitude and humour with which they faced bush life.

Contents:
Foreword
Introduction
Dolly Pots, by J. Sorensen
Dollypot, by Shaker
The Discovery, by F.R.D.
The Pean and the Flood, by A.H.P.
Darkie, by Jumbuk
In Search of a Camel, by W.B.S.
The Gold Digger, by F.G.Y.
'Prospecting; in Hacks, by Nungarra
Customs Outback, by 13th Eleventh
Stonehem and Laddie, by Bill Jim
A False Alarm, by The Snuffbox
An Old Timer Comes into his Own, by Ivan Orfulkoff
Peak Hill memories, by Silver Concha
Hard Times, by D.P.
The Soldier's Secret, by J.L.
Three Threes!, by Cinque Ports
Carr Boyd and Arizona Bill, by Gus Luck
The Rescue, by 2843
The Duke, by Alpha
The Battery at the Bar, by 13th G.B.
Two Days of Thirst, by John Meiklejohn
Pigs in Clover, by Suter Abis
Around Widgie, by Jaques
Selling the Show, by The Floater
The Outcrop, by Erb
Intuition, by Jumbuk
Mosquito Creek, by Bill Jimm
Kimberley Trails, by Erroll
Land of Opportunity!, by Red O'Shane
Mulga and Spinifex, by Clinker
The Lighter Side, by C.B.S.
Highly Explosive, by Old Jack
Goldfields Justice, by But Not Goodbye
He Threw a Seven, by John Meiklejohn
Tin Dog and Damper, by Battery
Black Flag's First Gold, by John Meiklejohn
Pestle and Mortar, by Raupo
Up Lawyers Way, by Nungarra
The Old Camp, by Montana
Demonstration, by Toepincher
Chasing the Colour, by Moondine Joe
The Tale of a Shirt, by Saltspray
Personality Parade, by Sedge Moore
Drunk's Luck, by M.S.
Chances, by D.P.
Mount Magnet Memories, by Sinker
Shades of Old Kookynie, by Ginger Green
Jacko, by Jumbuck
Gold Divining, by Westonia Arthur
Gold, by Ronaldo
Prospecting in  '93, by John Meiklejohn
Goldfields Hikes, by Gungare
A Champagne 'Shout', by S.F.A.
A Bloomer!, by Tueton Braid
A Dangler, by J. Walker
Early Cue, by John Meiklejohn
Fiendish Developments, by T.R.F.A.
When the Whistle Blows, by The Core Catcher
Sandstone 1907, by Sixteenth
A Policeman's Lot, by John Meiklejohn
Women Weight Chasers, by A.B.B.
Our Largest Nugget, by Battery
Kurnalpi Sidelights, by Alec of Lang Syne
State Census 1891, by James Walker
A Menzies Episode, by Utility
Golden Days, by Hugh Ensor
The Boys of the Old Brigade, by Nungarra
Old Jack Ryan, by J.L.
The Old Nicol, by J.L.
Cooks - and Cooks!, by Pilot
'Brummagen' Gold, by Pilot
Some Track Blazers' Troubles, by John Meiklejohn
Cane You Smell Camels?, by Pigweed Harry
A Miner's Right, by A.B.B.
The Spirit of the Nineties, by Ballistite
The Vindication of Bevan the Liar, by V.L.M.
The Spirit of the Fields, by Suter Abis
Halley's Comet and its Finder, by Double L.M
The Curse, by Taffy Bach
Paddy the Flat, by Runi
A Lake Way Legend, by John Meiklejohn
Burtville Beer Strike, by Marolia
Fun on the Fields, by Old Mac
The Miner's Song, by Pop E.
Goldfields Justice, by Nungarra
The Rush, by Silver Concha
A Tale of the Roaring Gimlet, by Alec of Lang Syne
Donald Duck, by Wandiwokerina
Crowned!, by 1986
Once in a While, by D.P.
Stiff Luck, by Tueton Braid
The Gympie Swinger, by Nungarra
The Prospector, by Pater
Another 'Suicide', by Ivan Orfulkoff
Retreating Residues at Nullagine, by 13th Ginger Beers
The Australian Flag, by John Meiklejohn
Gabriel, by Suter Abis
Five Pounds' Worth, by But Not Goodbye
The men We Knew Outback, by Alec O'Lang Syne