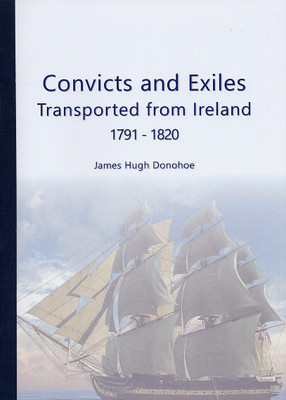 Convicts and Exiles Transported From Ireland 1791-1820

This work was developed under the working title 'The Convicts Transported from Ireland 1791-1820'. However, the records revealed a terrible Irish tragedy. Too many arrivals in Australia were not convicts at all. Many of them were placed aboard ships and despatched for no greater purpose than to rid Ireland of its Patriots.

So to leave the title as just 'Convicts' would have been a fallacy let alone a serious injustice to the memory of those great people who went on to pioneer the Australian people and its nation.

This is an index of the 6666 Irish transported convicts and exiles and their ship of arrival to late 1820.

The Irish convicts and exiles deserved a monument to them which reveals who they really were but alas this book is not their memorial despite the best intention to make it one. At least in the name that these Irish patriots and heroes and heroines gave to the foreign authorities in dangerous times they are recorded and remembered two hundred years later. Australia owes so much to them for developing this country's families, community spirit and political direction.

Contents:
Introduction
Acknowledgements
The Editor
The Convicts and Exiles
Bibliography