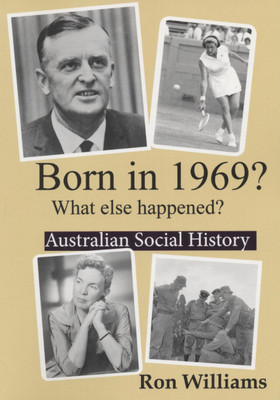 Were you born in 1969? Do you remember what happened during the year? Born in 1969 is one in a series of year-by-year books that highlight the social history happenings in Australia at that time.

Arranged chronologically by month, Ron Williams has made his way through newspapers, magazines and other sources and has come up with most of the major events that occurred during the year. Each volume in this series describes the happenings that affected people, and is designed to make you remember and wonder at things forgotten. And also designed to get the oldies and youngies talking about the past and rediscover heritage that otherwise would be forgotten.

In 1969, Hollywood produced a fake movie that appeared to show a few Americans walking on the moon. The last steam train was pensioned off as the Indian Pacific crossed the nation. There are now no Labor governments in office in all Australia, but Laborites should not worry because Paul Keating just got a seat in Canberra. Thousands of people walked the streets in demos against the Vietnam War, and HMAS Melbourne cut a US Destroyer in two. The Poseidon nickel boom made the fortunes of many, and the 12-sided cupro-nickel 50 cent coin filled the pockets of our new but ubiquitous jeans. Oz Magazine died an untimely death.