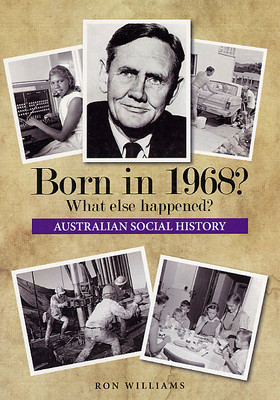 So you were born in 1968. Do you know what else happening in that year? Probably not. Lucky for you Ron Williams has created a book specifically detailing the major Australian-related events that happened throughout the year.

Born in 1968? is one in a series of year-by-year books that highlight the social history happenings in Australia at that time. Arranged chronologically by month, Ron has worked his way through newspapers, magazines and other sources to come up with most of the major events that occurred during the year.

Each volume in the series describes the happenings that affected people ... real people, and is designed to make you remember and wonder at things forgotten.They're also designed to get the older and younger generations talking about the past to rediscover heritage that otherwise would be forgotten.

In this 1968 you'll find that Sydney had its teeth fluoridated, its sobriety tested for alcohol with breathalysers, and its first Kentucky Fried. And its first heart transplant.  At the same time, the number of postal deliveries per day was reduced from two to one. There was still much opposition to conscription to the Vietnam War, and demos, often violent, were everywhere all the time. One operation in Vietnam saw 20 Australian 20-year-old youths, silly, rascally and lovable, killed in just a few days. The new Prime Minister, John Gorton, announced that no more troops would be sent to Vietnam. The casino in Tasmania was approved, so visiting there became a gamble.  We won a small pot of Gold at the Olympics, Lionel Rose became the first Aboriginal to become a World Boxing Champion, and poet Dorothea Mackellar (My Country) died at the age of 82.

Contents:
Preface to this Series
Picking a PM
Death is so Permanent
Shooting of a Prisoner
Whiter Goest Thou
Welcome to the Clubs
Operating on my Turf
Billy is Back
Jap Jobs
The War is Over - Maybe
Parents and Citizens
Home Units
Prostitution
The Siege at Glenfield
What's in a Name
Populate and go to Heaven
Bull-Fighting Anyone?
World Trouble Spots
Football Feuds
Censorship
Prostitutes Again
American Play Boys
Wogs and Bogs
Country-Town Bushfires
Summing up 1968