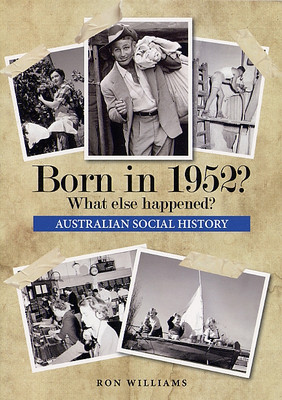 Most people know nothing about what happened in their year of birth. Ron Williams has created a series of year-by-year books, that details Australian-related events during each year.

So what did make news in 1952? Bob (Menzies) was not your uncle. Women smokers were keeping the home fires burning. Sid Barnes jumped a turnstyle and suited himself. US and China were still happily killing each other, and millions of Koreans were collateral damage. Some horses were entering a grey area, and women voted to do jury duty at their convenience.

Each volume in the series describes the happenings that affected people, real people, and is designed to make you remember and wonder at things you'd forgotten or didn't know about. They're also designed to get the older and younger generations talking about the past to rediscover heritage that otherwise would be forgotten.