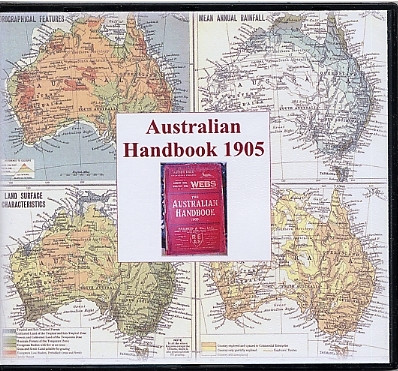 Covering New South Wales, Victoria, South Australia, West Australia, Tasmania, Queensland, New Zealand, British New Guinea and Fiji, the Australian Handbook and Almanac and Shippers and Importers Directory for 1905, the thirty-sixth year of issue, is a guide with all kinds of interesting and unique information.

Apart from a descriptive account and statistical information for New Zealand, New Guinea, Fiji and each of the Australian colonies and their towns, you will also find details on climate, education, religion, agriculture, population, societies and clubs, parliamentary and official departments, local self-government, telegraphic and postal details, police, banking, shipping, mining and land regulations,newspaper, manufacturers, emigration, as well as naval and military forces. As well, it includes a range of maps  street, railway and mineral. You will also find details of the governors, consuls and ecclesiastical appointments of the time. This handbook gives a snapshot of the world of our ancestors in the early 1900s.

CHATSWORTH (37° 50' S. lat., 142° 38' E. long.), post town, situated on the west side of the river Hopkins, in the county of Villiers, and electorate of Villiers and Heytesbury, shire Mt. Rouse, 167 miles (177¼ postal) due W. of Melbourne, on the Great Northern road from Warrnambool to Ararat. Tri-weekly mail to Wickliffe. Chatsworth Hotel. There is a State school (No. 1,382), in which Presbyterian services are held. Pastoral district. In the neighbourhood is the Hopkins Hill estate. Population about 80.

The Directory and Business Guide portion of the Handbook is a comprehensive listing of importers, exporters and shippers. For the importers and exporters it lists their name, address and what they trade (fishing tackle, gloves, locomotives, mining materials, and more) - exporters from England, Scotland, France, and Germany, and importers throughout Australia, New Zealand and Fiji.

This product contains high quality scanned images of the original handbook. It has been bookmarked for easy navigation. Pages can be searched, browsed, enlarged and printed out if required.