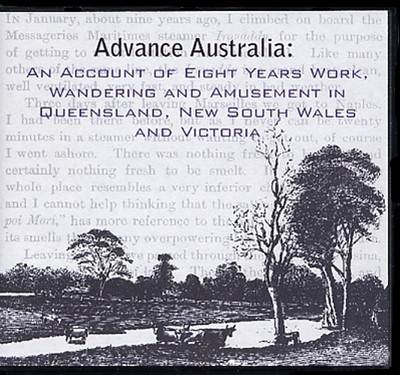 Written in 1885 by the English aristocrat Harold Finch-Hatton, fourth son of the Earl of Winchilsea and Nottingham, the book describes his eight years work, wandering, and amusement in Queensland, New South Wales and Victoria. He spent most of his time in the Mackay district of Queensland where a town now bears his name.

The book is of interest now mainly because he describes life in the colonies between 1875 and 1883  in the bush, on cattle stations, sugar plantations, goldfields and in the towns and cities. He discusses social issues of the time  drink, immigration and coloured labour, the native situation and the speculation on imperial federation.

... It is impossible for anyone to visit Australia without speculating upon the future that awaits a country possessing such enormous natural wealth and resources. The rapid development that has taken place in every part of this continent during the past thirty yearsa development for which there is no parallel in historymakes it certain that before long Australia will form a very considerable item in making up the balance of political power throughout the world. Already she has become a financial power of the first magnitude .....

SAMPLE FILE:
Click here to download a file of sample pages from this book Right click on the link and select "save as" - to a location on your hard drive. The sampler can be opened, navigated and searched as with the full CD file/s. Sample files usually contain the title page, contents, some introductory pages and sample pages from the body of the book. Often the complete index from the original book is included.

ALSO AVAILABLE AS AN EBOOK:
Advance Australia: An Account of Eight Years Work, Wandering and Amusement in Queensland, New South Wales and Victoria