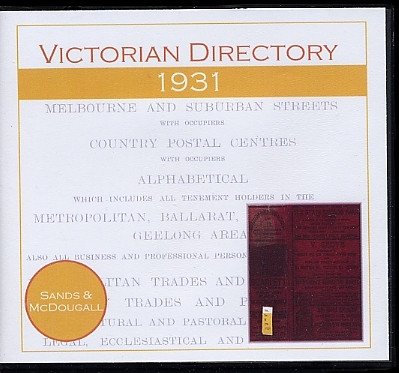 A massive directory of over 2,200 pages, this Sands and McDougall directory, which in 1931 was in its 75th year of publication, consists not only of a Melbourne Directory, but also its Suburbs and the country areas too. It is divided into five main sections:

Separate directories are given for the following areas, making the work comprehensive and complete:

The directory includes many pages of advertisements - all useful information, often including names of people and places. The whole directory, including most text in the advertisements, is searchable, useful not only for finding names, but also places, occupations and other information for family and local historians.

This product contains high quality scanned images of the original directory. It has been bookmarked for easy navigation. Pages can be searched, browsed, enlarged and printed out if required.