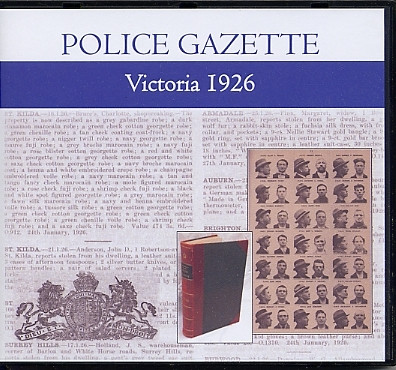 An amazing source of genealogical and historical information, the Police Gazettes have been a relatively untouched resource, partly because of accessibility and partly because they weren't generally known as a key source. Now that they are being released on searchable CD-ROM, they are available for all to use.

Anyone researching their family will have a 'lost' family member or two! You may well find them listed here, on either side of the law. Maybe they were a policeman, or someone who was a victim of crime. You can find the physical details on many people listed here, including those missing, wanted or released, which helps to paint a picture of them (name, aliases used, age, height, colour hair, colour eyes, distinguishing features, even type and colour of clothing worn).

This CD contains all issues released during 1926, and contains information on housebreak-ins, robberies, arson, murders, lost horses and cattle, inquest verdicts, escaped prisoners and reports on those released. Also included are lists of warrants issued, appointments and changes in the Police Service, lists of arrests, escaped prisoners, and missing persons, men deserting their wives and children, as well as deserters from service and more ... Notices from Police Gazettes from other states are also often included.

A fascinating read for all with an interest in Victoria and its people in the 1920s. This CD contains high quality scanned images of the whole of the years issues. It has been bookmarked for easy navigation. and pages can be searched, browsed, enlarged and printed out if required.