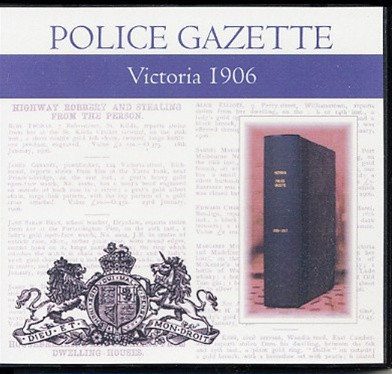 Police Gazettes are a unique, useful and extremely fascinating resource for local, family and social historians and researchers in other fields throughout Australia. Compiled to be distributed amongst the Police Force only, these Gazettes therefore contain details and information that can not be found anywhere else.

They include court lists, lists of warrants issued, appointments and changes in the Police Service, lists of arrests and discharges (which include descriptions), escaped prisoners, and missing persons, lost and found items, deserters of families, and deserters of service, licences issued, as well as notices from Police Gazettes interstate if it was felt that the offender might be heading this direction.


Name, Occupation, Address, Date of Zssue, Court of Petty Sessions at which
Certificate was granted.

Unique features in this years' issues include: Gold buyers licences, Marine stores collectors licences, Auctioneers' licences, details of legally qualified medical practitioners, and a complete listing of the Police Officers, Sub-Officers and Constables in the Victorian Police Force as at 1 January 1906. This provides not only name, registration number, and rank, but also date of birth, date joined, date promoted to present rank, station, married or single status, and mounted or foot.

High quality scanned images of the whole year's worth of original issues. This CD has been bookmarked for easy navigation, and pages can be searched, browsed, enlarged and printed out if required.