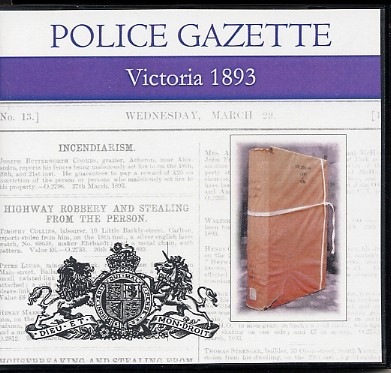 Containing all 52 issues of the Victorian Police Gazette released for the year 1893 ... checking these records has never been easier now that they available on fully-searchable CD-ROM. Just type in a name, place or other keyword and you find all relevant entries. This vast resource of valuable information is now available for all to use and enjoy.

The Police Gazettes contain information that can not be found anywhere else. Each issue is usually eight (or so) pages, and contains information on changes within the police force such as promotions, demotions, resignations, dismissals, deaths etc. Also details on rewards, housebreak-ins, robberies, arson, murders, inquests, lost horses and cattle, deserters, escaped prisoners, missing friends, lost, found and stolen items, reports on those apprehended and discharged, and so much more. Notices from interstate police gazettes are often included.


Deserters from H.M. Service
Gunner William Paterson is charged, on warrant, with deserting from the
Victorian Artillery, at Queenscliff, on the 29th December, 1892.
Description:- Age not given, 6 feet high, fresh complexion, fair hair,
light-blue eyes, scar on left knee. Is a butcher by trade, and a native of
Glasgow, Lanarkshire, Scotland. Was away on leave when he deserted, and gave
his address as Yarraberg Hotel, Richmond. (See also P.G., 1892, p. 320,
O.10160) - O.80. 6th January, 1893


Missing Persons
Mrs. Copperson, maiden name Mary Ann Leahy, is inquired for by her brother,
Patrick Leahy, No. 19 Mead-street, Philadelphia,  Pennsylvania, U.S.A. She
left Finiha, county Tipperary, Ireland, over 30 years ago, and was heard of
as having married a man named Albert Copperson, who resided at Creswick
Creek. Inquiries have been made at Creswick and Talbot where it is said they
removed to, but no trace can be found. - O.5345. 20th June, 1893.

Not only is this a valuable resource for those researching in Victoria, but it makes for fascinating reading even if you don't have family there.

This CD contains high quality scanned images of the whole years worth of issues. It has been bookmarked for easy navigation. and pages can be searched, browsed, enlarged and printed out if required.